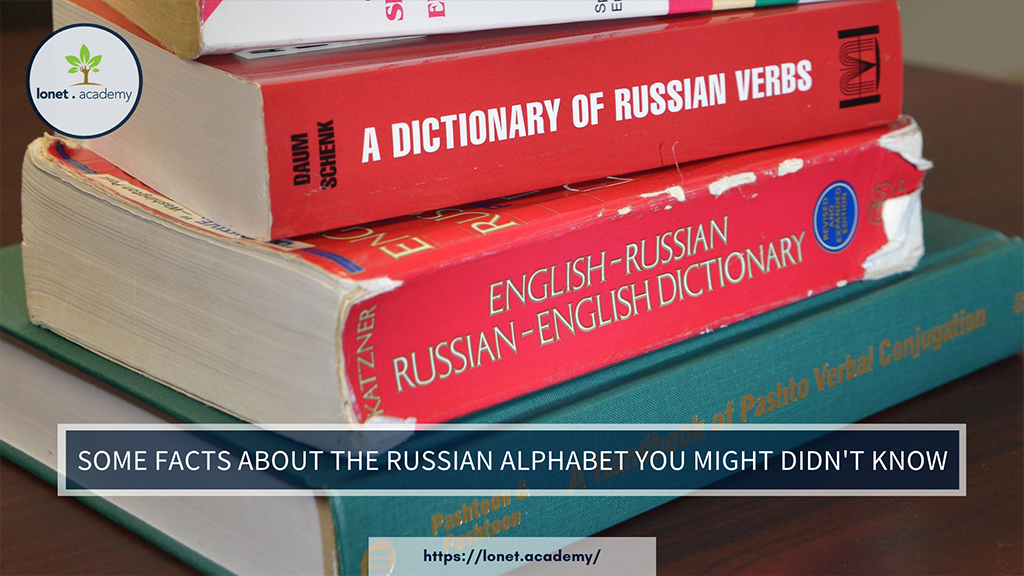 Some facts about the Russian alphabet you might didn’t know

Why you should learn Russian alphabet?

Russian is the most widely spoken Slavic Language

Russian is written using the Cyrillic script. The term “Cyrillic” (Кири́ллица) is derived from one of the founding fathers of the Russian language – Saint Cyril. In the eighth century, together with his brother, Methodius they devised the Glagolitic (Глаголица), the oldest Slavic alphabet that was used to translate the Gospels and liturgic books.

Russian is the 8th most spoken language

Well, you probably knew already that Russian is one of the most spoken languages in the world – over 258 people worldwide know how to speak Russian. What you probably didn’t know is that The Russian language is the most geographically widespread in Eurasia. It is an official language in Belarus, Kazakhstan, Kyrgyzstan, and of course in Russia. Apart from these countries, most people from the former Soviet Union countries know how to speak Russian. Thus, if any former Soviet republic is on your destination list, Russian is the language to communicate there.

The constitution of the Russian “Aзбука” (Alphabet)

Russian Alphabet (ру́сский алфави́т) consists of 33 letters, of which there are ten vowels, 21 consonants, and two signs. Yes, you read it correctly! The Russian alphabet has separate letters that you don’t have to pronounce at all; however, they indicate how a previous letter in a word should sound – either the intonation should be hard or soft.

The Russian alphabet used to have more letters

‘ – wasn’t pronounced at all but had a meaning of English “or”.

Not enough? OK, wait ’till you hear this… Russian had another eight letters before the year 1750. These were:

Well, even the old Russian alphabet wasn’t as lengthy as the Khmer alphabet, but we might agree that 46 letters are quite overwhelming for modern times. Luckily, the Russian language reforms removed these 13 letters. Plus, there are also speculations that further rarely used letters (Ы, Ь, Ъ) are marked for removal; however, they are still used to the date.

Five letters in the Russian alphabet will look and sound familiar. For instance, to an anglophone, Russian capital letters A, K, M, O, and T look and are pronounced in a word exactly the same way. Though, the same case letters might look a bit different. Small M you write as м, while T as т.

You can also discover 13 Russian letters that look actually different but sound similar to English letters, but you write them otherwise. These are:

The remaining letters, apart from signs, require several English letters to pronounce. These are:

One letter in the Russian language is quite peculiar in terms of pronunciation. This letter is “Ы“. Your best bet to learn more about this letter is to reserve lessons with a native speaking tutor.

If you would like to try, on Lonet.Academy you can find qualified native speaking tutors. For example:

Is it hard to learn Russian?

Russian isn’t the easiest language to learn, especially Russian syntax and morphology. Nevertheless, it certainly isn’t the hardest. In terms of difficulty, respondents usually assess it as a moderately hard language to learn. It takes time, but your efforts are absolutely worth it. Apart from what was already mentioned, Russian is the native language of marvelous writers and poets – Ivan Turgenev, Anton Chekhov, Fyodor Dostoyevsky, Leo Tolstoy, Alexander Pushkin, Mikhail Lermontov.

Register here and go to your goals in interesting way with our Russian language tutors. You’re not sure which tutor to take? Book free consultation!

Want to try, but have no idea how it works? Read “How It Works“.

Why Should I Learn a Language With A Tutor?

Learn A Language And See What Happens In Your Life

Learn Languages. It Will Make You Happy.