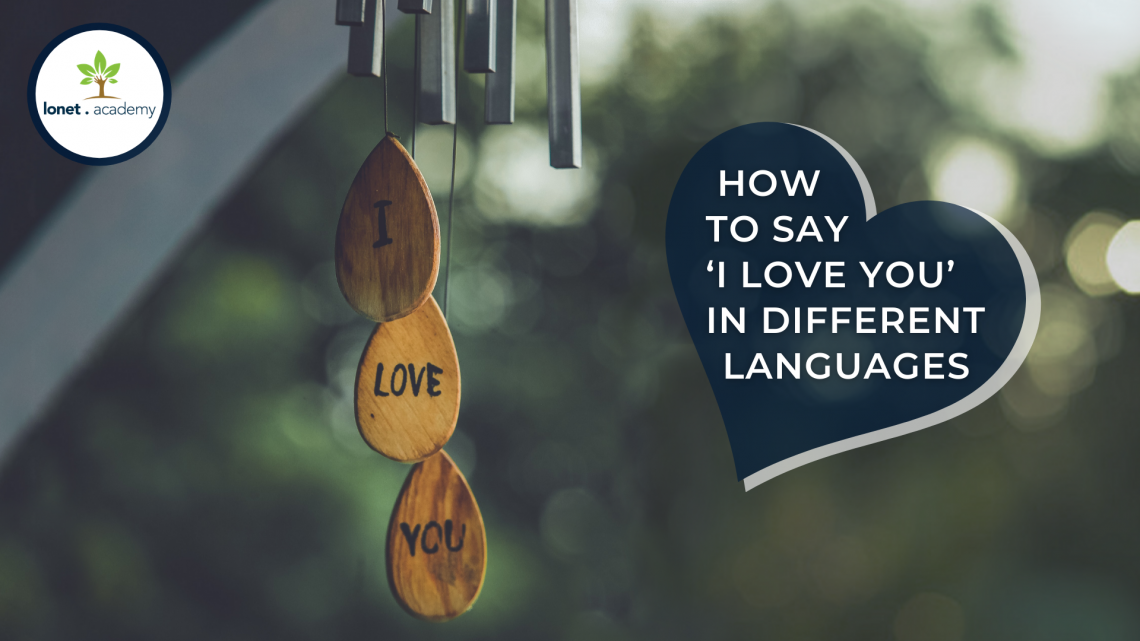 How to say ‘I love you’ in different languages

There could be many different reason why you might want to say ‘I love you’ in different languages. In an increasingly connected world, meeting people from all over the planet is now very much the norm, you could be planning to surprise your partner with a proposal on your next trip abroad and want to use local dialect, or you might just think of it as a romantic because, well why not?

In any event, getting it right requires more than just finding the correct words. Pronunciation will be key, so make sure you practice, use online resources to listen to how the words are formed and how they flow, and of course, say it with confidence. Get those three elements right and you’re there!

Now, we can’t possibly go through how to say ‘I love you’ in every language here, but so we’ve chosen 10 of the most popular to get you started.

How to say ‘I love you’ in Russian

Russian is an emotive and poetic language – perfect for the phrase ‘I love you’. Unlike many European languages, Russian does not originate from Latin and actually has its roots in Slavic. This makes it unique and melodic due to the increased number of vowels. It is also the official language of astronauts so if you find yourself falling in love in space, you’ll be just fine.

‘I love you’ in Russian translates as ‘я тебя люблю’ (pronounced ya tebya lyublyu).

How to say ‘I love you’ in Spanish

As the second most popular language in the world, and the first language of 21 separate countries, Spanish is a great language to have a few phrases in. And as the home of salsa dancing, there is no doubt that ‘I love you’ could be on your lips in any Spanish speaking nation.

‘I love you’ in Spanish translates simply as ‘Te quiero’.

How to say ‘I love you’ in German

You may be surprised to hear that German is the most common mother-tongue in Europe. It means when travelling the continent, it can be a very useful language to know. Often described as the language of writers and speakers, there is a romanticism about German that perfectly complements those three little words.

‘I love you’ in German translates as ‘ich liebe dich’.

How to say ‘I love you’ in Italian

The Italian language is as passionate as it is emotive. Melodic, free-flowing and lively, it encapsulates the phrase ‘I love you’. It is a beautiful language synonymous with the Mediterranean, sun-kissed beaches and sensual atmosphere. The language of Casanova and influential in the life of the great wordsmith, William Shakspeare, Italian is a language that oozes love.

In Italian it translates as ‘ti amo’.

How to express amorous feelings in French

Home to the city of love itself, France is well-known romance and love. From Parisian cafes to the beaches of Nice, France is a nation steeped in sensuality. It is also the language of ballet and is closely associated with luxury and indulgence.

‘I love you’ in French translates as ‘je t’aime’.

How to say ‘I love you’ in Portuguese

Like Spanish, Portuguese is language closely associated with Latin America. And when hearing someone speak the language, it’s difficult not to see visions of salsa dancing. Portuguese relies in intonation, making it smooth, sensual and rhythmic.

‘I love you’ in Portuguese translates as ‘Eu amo Você’.

How to say ‘I love you’ in Latvian

Latvian is another inflective language in which the length of vowels can change the meaning of word. The same can be said of Portuguese and Italian. As such, Latvian has a rhythmic poetry to it which is both enchanting and romantic.

These tree words in Latvian translates as ‘Es Tevi mīlu’.

How to express tender feelings in Arabic

Arabic is a poetic language that conjures up romantic images. The calligraphy alone is unique and has an air of mysticism about it. And with over 422 million Arabic speakers across the globe, wherever you go there is a fair chance you’ll meet someone who speaks the language.

‘I love you’ in Arabic translates as ‘أحببك’ (pronounced ahababak)

How to say that you have feelings toward someone in Estonian

Estonia is famous for its lyrical poetry and that translates into its everyday dialect. It is a Uralic language spoken by around 1.1 million people worldwide, with approximately 900,000 of those currently living in Estonia. To tell someone you have feelings toward someone in Estonian, is to be part of a unique group of people.

‘I love you’ in Estonian translates as ‘Ma armastan sind’.

How to say ‘I love you’ in Catalan

The Catalan language, almost lost after the War of Spanish Succession (1701 – 1714) was revived early in the 19th century by a new wave of a Catalan artists, authors and playwrights. This period, became known as La Renaixença and saw the reintroduction of traditions such as ‘Jocs Florals’ (floral games). The games saw Catalan poets compete in categories which included ‘best love poem’ which, as you can imagine makes for a romantic language in which to say to someone ‘I love you.’

In Catalan it would sound as ‘T’estimo’.

Those three little words that mean so much are different in languages across the world, but the heartfelt sentiment they convey is universal. Learning how to say them in different languages reminds us that, no matter where we are from and where we are now, we are all the same. Learning phrases such as ‘I love you’ can inspire a new relationship with language learning. If learning the 10 phrases above has ignited a passion in you, there is no time like the present to find an online language tutor fall in love all over again – this time with the foreign language.

Want to say something more, than “I love you”?

There are many ways to learn a foreign language and expand your vocabulary. And there are tons of information, material, video lectures and other online tools on the Internet that will help you in the process of learning any language.

Russian language tutors will help you improve your Russian skills at any convenient time, without even leaving your home.

Learn Arabic online from anywhere in the world with Arabic language tutors.

You can learn Spanish with a native speaker from a preferred region (including Chile, Peru, Argentina, etc.): Online Spanish teachers.

Learn one of the most romantic languages ​​in Europe with French tutors online.

Why Should I Learn the Language With A Tutor?

The Best Ways To Learn Spanish